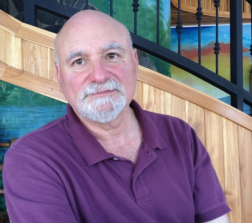 He has such a formal name, Nathaniel Robert Winters, but for those whom he meets and those who know him, his name is "Bob".

Bob can usually be found reading a book, and that book will more likely be an adventurous thriller, or an engrossing work of poetry, an enthralling piece of fiction, or a factual honest to goodness true story. Writing always has been on Bob's bucket list; from his early days in New York to the battlefields of Viet Nam. And to his wonderful haven in Napa Valley, reading and writing have always been at the core of his being.

His 16th book, Love's Mysteries in Prose and Poetry, allows Bob to share past experiences mixed with deep thoughts and desires of future events.

After his widely respected and personal masterpiece, Omaha Kid, Bob expanded into a more introspect view of the heart. When not absorbed in his latest version of love and mysteries, Bob loves cooking, playing Bocce ball in his Napa Valley league, college football, and spending time with his lifetime partner Colleen and their son Sam.

More on The Californer
Bob's books are available on Amazon.com   Nathaniel Robert Winters

Other works by Bob Winters:
Adventures of the Omaha Kid
Past the Future
No Place for a Wallflower
Heavenly Bodies and Other Diversions
Seventh Grade Blues.

Nathaniel Robert Winters has published 16 books; he's won awards for non-fiction (Omaha Beach) and the Voices of Lincoln Poetry award (Of Dreams), winning over 1500 other poems. Winters grew up in suburban N.Y.C. with a slight Brooklyn accent, which is why he calls water 'wadda.' The Navy Vietnam Veteran earned a BA in History & Sciences from Sonoma State University and a Master's in Education from CSU Stanislaus. Despite having Parkinson's disease, he writes almost every day.