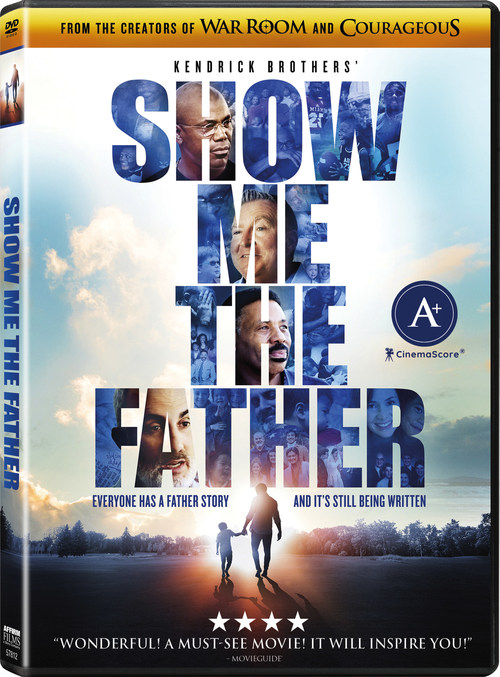 Everyone has a unique father story. Whether positive or painful, it's always personal and can deeply affect the core of our identity and direction of our lives. The Kendrick Brothers' SHOW ME THE FATHER is their first documentary film and features a variety of amazing, true stories. This captivating movie takes audiences of all ages on an inspiring and emotional cinematic journey. Providing a fresh perspective on the roles of fathers in today's society, SHOW ME THE FATHER invites you to think differently about how you view your earthly father and also how you personally relate to God.

The DVD and digital release comes with an extensive array of bonus material, including over 30 minutes of behind-the-scenes content. It also includes a special feature with Dr. Tony Evans and a moving, in-depth look at the power of reconciliation and mentorship.

A special Kendrick Brothers DVD double feature will also be available beginning December 7. The set will contain SHOW ME THE FATHER and COURAGEOUS LEGACY. Including bonus scenes and a new ending, COURAGEOUS LEGACY is a remastered, extended version of the Kendrick Brothers' classic film that has been impacting fathers and families around the world since its initial release 10 years ago.

SHOW ME THE FATHER has a runtime of approximately 91 minutes and is rated PG for some thematic elements.

BONUS FEATURES AVAILABLE ON DVD AND DIGITAL
CAST AND CREW

ABOUT AFFIRM FILMS
AFFIRM Films, launched in 2007, is an industry leader in faith-based/inspirational film with worldwide box office of over $650 million including such hits as SOUL SURFER, WAR ROOM, RISEN, HEAVEN IS FOR REAL, MIRACLES FROM HEAVEN, OVERCOMER and most recently A BEAUTIFUL DAY IN THE NEIGHBORHOOD in partnership with TriStar Pictures. AFFIRM produces, acquires and markets content that inspires, uplifts and entertains audiences around the world focusing on family and faith. Sony Pictures Entertainment is a subsidiary of Tokyo-based Sony Corporation.

Register to get all the latest news from AFFIRM Films at www.affirmfilmsupdates.com and follow AFFIRM Films on social media at @AFFIRMFilms.

More on The Californer
ABOUT PROVIDENT FILMS
Provident Films creates entertainment that inspires audiences to believe in God's purpose for their life. Since 2006, the company has pioneered the faith-based film genre yielding over $280MM in box office sales. The company produced industry hits such as Kendrick Brothers' OVERCOMER, WAR ROOM, COURAGEOUS, FIREPROOF, FACING THE GIANTS, and the Erwin Brothers' WOODLAWN and MOMS' NIGHT OUT. Most recently Provident Films produced BLUE MIRACLE in partnership with Netflix.

Provident Films is part of the Nashville-based Provident Entertainment, a division of Sony Music Entertainment.  For more information, visit ProvidentFilms.org.

ABOUT KENDRICK BROTHERS PRODUCTIONS
Kendrick Brothers Productions is led by brothers Alex, Stephen and Shannon Kendrick and exists to glorify God by inspiring audiences of all ages with resources that positively impact their faith, families, and personal relationships. By blending entertaining stories with doctrinal integrity, the Kendricks have produced theatrical films, books, and group curriculum with a growing international reach.

2021 marks the 10th Anniversary Legacy Edition release of their hit film COURAGEOUS and also the debut of the filmmakers' first, feature-length documentary, SHOW ME THE FATHER.

The Kendricks began their journey in 2003 with the production of the micro-budget film, FLYWHEEL, which has now sold over a million copies in DVD format and paved the way for the following theatrical releases: FACING THE GIANTS, FIREPROOF (#1 Independent Movie of 2008), WAR ROOM (#1 at the US box office) and OVERCOMER (#1 Inspirational movie of 2019). The Kendrick Brothers' body of work has been credited with helping create the subcategory known as faith-based films. They are currently in production on their 7th feature film.