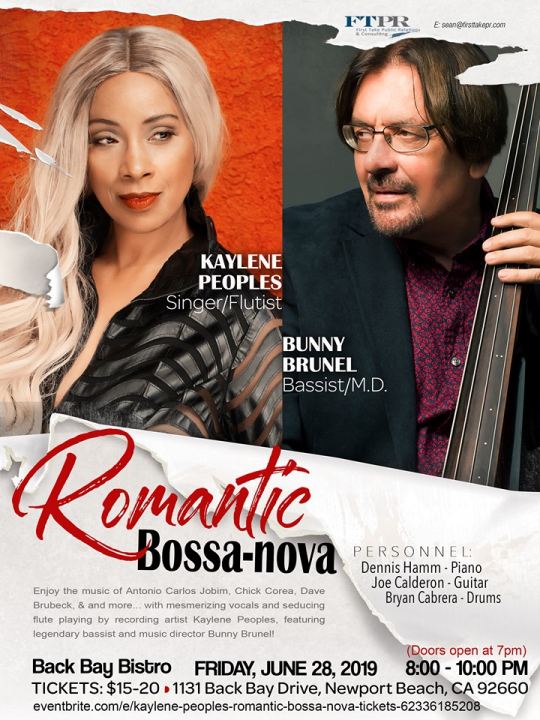 Enjoy the music of Antonio Carlos Jobim, Chick Corea, Dave Brubeck, and more... with mesmerizing vocals and flute-playing by recording artist Kaylene Peoples, featuring legendary bassist and music director Bunny Brunel!
NEWPORT BEACH, Calif. - Californer -- Anyone who has ever seen Kaylene Peoples perform, wants and needs to see her again. This stunning vocalist fluting diva literally blows her loyal fans away, whether she's singing those five octaves of hers or mesmerizing them like a snake charmer with her cherished flute. Peoples is a modern-day Pied Piper. Instead of luring children, she sways us with the sheer emotion she emits from both her instruments. Whether you're an empath or a stony, non-emotional onlooker, you WILL be moved!

A very popular show that was birthed last year on June 6, 2018, at the famous Catalina Jazz Club in Hollywood, Kaylene Peoples Romantic Bossa-Nova CD Release Concert received rave reviews, standing ovations, and encores. A concertgoer gushes, "This is the best concert I've attended since I've been in Los Angeles!" Peoples's CD Romantic Bossa-Nova was released with only limited copies for those who attended that concert. There is promise of the final, official release sometime this year. On that CD, Kaylene sings Brazilian songs from the Great American Songbook—tunes, such as "Berimbau," "Besame Mucho," "Dindi," and others.

Kaylene Peoples on Bossa-Nova, Schmooze Jazz Magazine
"I'm moving and I also feel like I can get really deep with it on certain songs. I'm a big fan of Antonio Carlos Jobim. He's actually really one of the main people that I sing. And his lyrics are very deep. They translate [well], and people are affected by this music. It's simplistic lyrically and melodically. It's not complex but there's something about it that brings out the emotion in people; it all resonates with the audience. We're all one during a performance. It's Zen. And it makes me feel good!"

More on The Californer
One of the real treats on the Romantic Bossa-Nova CD is a guest appearance by the album's bassist and guitarist Bunny Brunel, who shocks with his perfectly suited Brazilian vocal on the duet with Peoples "Águas de Março." Who knew? The vocal performance is brilliant and the discovery that the multi-Grammy-nominated fusion artist Brunel used to play guitar and sing in a tiny club in his early youth in Nice, France—this was a job his father had gotten him. "I had to learn songs [on that job], where I played guitar while singing Spanish tunes (and I don't speak Spanish). It never occurred to me that I was any good. I was just doing my job. In 1973, I was on tour with George Moustaki, playing acoustic bass and I learned how to play 'Águas de Março' on the guitar from Fabien Maman. I guess it paid off." Recalls Bunny Brunel. Since then, Brunel became an international sensation as a bass soloist and musical director. He was the bassist for almost a decade in Chick Corea's band, Tony Williams's band; played the bass for Tania Maria, Herbie Hancock, Dizzy Gillespie; was the bassist and music director for Michel Polnareff; and was nominated for a Grammy with his own band CAB. I guess talent crosses all boundaries; at least it did with Bunny Brunel. https://www.bunnybrunel.com

When Kaylene Peoples performs her show "Romantic Bossa-Nova," it's emotional, heartfelt, stirring, memorable. Her vocals leave their imprint as she sings "Spain," "Corcovado," "Agua de Beber"; and her flute on "One Note Samba" and "500 Miles High" is unique, compelling, and reminiscent of Jethro Tull, Dave Valentin, and Herbie Mann. She has created a style all her own. Many who've witnessed her in concert have commented that her flute is the most unique they've heard, leaving them awestruck. There's nothing wrong with being great on more than one instrument. In Peoples's case, she is both a master vocalist and a magician flutist!

"Kaylene Peoples is an amazing vocalist and flute player. It has been a real pleasure to perform with her . . . what an incredible voice.  She reminds me of the great jazz vocalists of our time.  I love her voice because she is the real McCoy." States Bunny Brunel.

Back Bay Bistro:
"Whether you enjoy breathtaking views of the Back Bay, during a working lunch or celebrating with a romantic dinner under the stars, our waterfront California restaurant showcases fresh and local ingredients to satisfy every palate. Indulge in delicious, award-winning, American cuisine as the sun embraces the horizon."—Back Bay Bistro

ABOUT KAYLENE PEOPLES
Recording artist Kaylene Peoples is a singer and flutist and an L.A. Music Awards-winner producer. Kaylene's first jazz CD All Jazzed Up! made a splash across the nation when her single "Do You Remember" was played across the country. The single climbed to the top of the independent charts (AC40/NMW! Top 100 Chart/FMQB & ACQB! and Indie 100 chart). Her CD My Man has made quite an impression on jazz lovers through the airwaves and in concert. It made the ballot for the 2015 Grammys; and her award-winning single "Giant Steps" is the most unique version of the Coltrane song yet, featuring legends Bunny Brunel, Hubert laws, and Bobby Lyle. To add to her dossier of iconic musicians with whom Peoples has also recorded/performed are Jerry Goldsmith, Jeff Goldblum, Stanley Clarke, Larry Dunn, John Beasley, and Patrice Rushen.  Kaylene Peoples continues to blow her audiences away with her incredible vocal performances and equally impressive instrumental virtuosity! Visit https://www.kaylenepeoples.com.