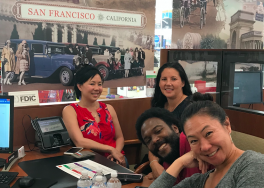 SAN FRANCISCO - Californer -- After 20 years of teaching partner acrobatics, aerial arts, and handstands to professional performers as well as movement enthusiasts Dominik Wyss was told that the building that housed his gym was sold, and would be torn down. This circus training facility, located on Cayuga Street, was simply called "Cayuga". Although for the community to which it served, it was known as a powerhouse of training talent. It was a place where people learned how to take risks, fail safely, analyze what went wrong, grit their teeth, and do it again, and do it better. It was a place where professionals played, and enthusiasts developed skills. It was also the training space for the local performance troupe Circus Automatic- best known for their edgy, beautiful and daring performances and their support for non-profit mental health organizations and homeless youth services. On June 30th, 2019 the Cayuga gym closed its doors.

Mr. Wyss was encouraged by community members to start a new training space for circus artists.  He teamed up with Teri Wing, an accomplished contortionist who taught at Cayuga, Ariel Mihic a partner acrobatics teacher and co-founder of Precision Acrobatics, and Sarah Kim an acrobatics teacher with a background in social work management. The new team has created an LLC and will be opening the new space, named Salto SF, this fall. "It is an exciting time to develop a new training space. We are letting go of what Cayuga once was, and creating Salto SF with its own character and commitment to the community"- Dom Wyss. In addition to supporting performance artists and teachers, Salto SF will also be a place of healing and wellness for the general public- open to health educators, massage practitioners, and physical therapists.

More on The Californer
Salto SF has already seen an outpouring of support from the community through their public GoFundMe campaign, and performance offerings for Salto SF's public fundraising event on September 20th at The Midway. The San Francisco community is invited to attend Salto SF's Fundraising event, a dance party and circus performance gala at The Midway (900 Marin St).  You can also show your support of San Francisco's vibrant performing arts community by contributing to Salto SF's fundraising campaign: https://www.gofundme.com/f/salto-sf-doors-open. Come and see the show, dance, relax and celebrate with us. More information and tickets to the event can be found at www.saltosf.com.

Salto SF's mission is to provide affordable rental space to small businesses, service providers, and community members who will join us in offering access to the knowledge and skills for a healthy and active lifestyle to all genders, ethnicities, physical abilities and sexual orientations to practice without discrimination.

Filed Under: Entertainment, Arts
0 Comments
Latest on The Californer