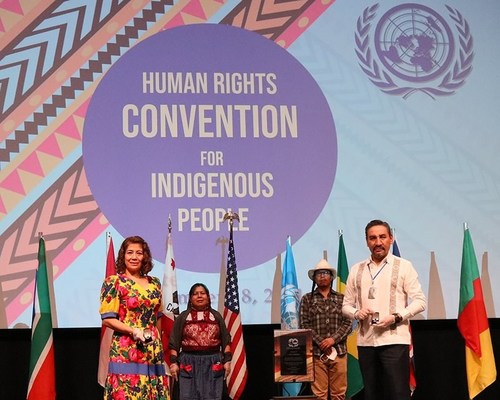 LOS ANGELES, Oct. 11, 2021 /PRNewswire/ -- At a convention hosted by the Church of Scientology of the Valley, advocates celebrated the unique and vibrant cultures of indigenous people of the Americas and decried the widespread abuse of their human rights. The convention was held as part of a celebration of Hispanic Heritage Month September 15–October 15.

While Indigenous Peoples' Day honors the history and cultures of the native people of the Americas, Manuel Velasco, president of the Administrative Court of Justice of the State of Oaxaca and his colleague justice Raul Palomares, began the program with a passionate appeal for the end of crimes against vulnerable indigenous women and children.

Walter Batres, president of the Guatemala Migrants Network, briefed the convention on the plight of thousands of migrants living in squalor at the U.S. border, hoping to escape the human rights abuses they suffer in their native countries. "We point fingers at the Taliban in Afghanistan, yet we encounter similar abuses in America," said Batres, highlighting the urgency of addressing the rights of the indigenous people of Mexico and Central America.

More on The Californer
Indigenous writer Gabriel Martinez addressed the convention in Zapotec, the dialect of the Zapotec people of Oaxaca and neighboring states. He emphasized the importance of free expression and exercise of the traditions, religious beliefs, mores and ethnic customs of his people and all native communities.

The Church of Scientology of the Valley accepted an award from the convention presented in recognition of Scientology Founder L. Ron Hubbard. The plaque honored Mr. Hubbard for founding an international movement "with the purpose of building a civilization with freedom and justice for all." It describes Mr. Hubbard as "a leading light in the quest for building a better world."

Serving an expanding community of Scientologists in North Hollywood and the San Fernando Valley, since its dedication in March 2017 by Scientology ecclesiastical leader Mr. David Miscavige, the Church of Scientology of the Valley has become a meeting ground of cooperative effort to uplift citizens of all walks of life, backgrounds and denominations.

More on The Californer
The Church of Scientology of the Valley is featured in an episode of Destination Scientology on the Scientology Network, available on DIRECTV Channel 320 and streaming at Scientology.tv, on mobile apps, and via the Roku, Amazon Fire and Apple TV platforms.