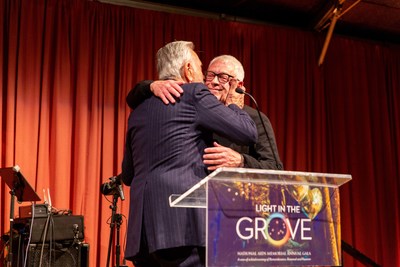 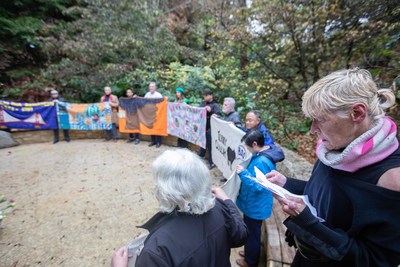 National AIDS Memorial marked the annual day of hope, healing, and remembrance with observances at the 10-acre Memorial Grove and displaying Quilt in nearly 100 communities throughout the U.S.

The two days of events brought together leaders on the front lines of the epidemic for powerful conversations and events focused on "Changing the Pattern for a Future without AIDS," referencing a major initiative of the Memorial that is bringing the Quilt to the South to address the growing crisis of rising HIV rates amount communities of color and marginalized populations.

Jones, who founded the Quilt thirty-five years ago, was recognized for his visionary leadership, activism, and powerful voice in the fight for health and social justice. He remains an inspirational force for change and action today, standing up without hesitation and using his voice for those who are often overshadowed and not heard.

Speaker Nancy Pelosi praised Cleve in a special video tribute, saying, "Cleve, you are a force of nature – unshakable in the face of adversity, overflowing with a passion for serving others."

"When the AIDS crisis tightened its grip on San Francisco – when pain and despair grew rampant – you kept hope alive," Speaker Pelosi continued. "You were a shining light in the dark, building community out of grief and spurring action out of anguish. From the halls of power to union halls and picket lines, you have never relented in your mission: empowering the oppressed, tearing down injustice and honoring the dignity and beauty of every person."

Presenting the award to Cleve was former San Francisco mayor and mentor Art Agnos to an audience of more than 600 people from the community who gathered on the eve of World AIDS Day for a gala to support the Memorial's programs. "I'm honored to receive this award, but more importantly I'm so pleased that the Quilt now has a permanent home with the National AIDS Memorial and that it is continuing its mission of activism and justice. One thing I've learned is that through hope one finds courage and through courage we find love. Love is at the core of what we do and that is what this Quilt represents."

More on The Californer
The National AIDS Memorial worked with local partners from across the country to display hundreds of Quilt sections featuring more than 3,500 individual panels in nearly 100 communities on World AIDS Day. The largest Quilt display ever in Alabama is taking place in Montgomery and surrounding areas as part of the memorial's Change the Pattern initiative. The program, funded through a $2.4 million grant from Gilead Sciences, is organizing quilting workshops, displays and educational programming with Southern AIDS Coalition throughout the Southern U.S.

"On this World AIDS Day, it is inspiring to know that thousands of Quilt panels are on display in communities across the country, touching hearts and minds through the stories represented in the fabric," said Gilead Sciences Chairman and CEO Daniel O'Day. "The Quilt's purpose remains as strong and important today, as it was thirty-five years ago, when the vision of Cleve Jones sparked a powerful movement to advance health and social justice."

The National AIDS Memorial's World AIDS Day Observance panelists highlighted the importance of the work being done around the country, the interconnectivity of issues to reach zero, and the importance of education and outreach to at-risk populations during three powerful conversations available for viewing online on the memorial's website and include: Reflections with Cleve Jones and 35 years of the Quilt; The State of the Epidemic Today with Leaders on the Frontlines; and Young Leaders Making an Impact.

"As our community comes together this World AIDS Day, it's hard not to look around and see who's missing – our friends, lovers, and family we've lost over four decades of this horrific, cruel disease," said National AIDS Memorial CEO John Cunningham. "It always brings tears, and we carry so many emotions, particularly as we think of what could have been. But for me, as a man living with HIV/AIDS, I shift to a brighter space, choosing to look around me, thinking about so many of us still here, living and thriving. Survivors, who have so much to be thankful for, but also a heavy burden to share our own stories and journey, so history never repeats itself."

More on The Californer
He continued, "Today, people are still dying and there should have been a cure long ago. We are angry because bigotry, hate, and stigma persist today in society. And we carry shame, because communities of color and marginalized populations continue to be disproportionately impacted by HIV and discrimination, and it shouldn't be this way. It's time to change the pattern."