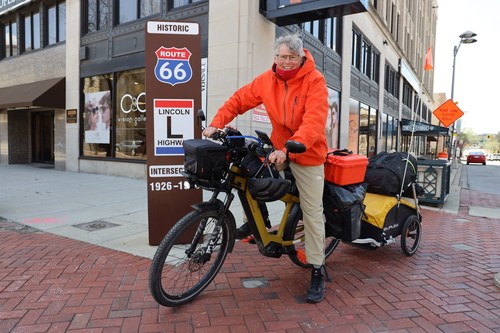 SAN FRANCISCO, Aug. 2, 2022 /PRNewswire/ -- For the first time ever, an electric bike was used for a 4,500-mile solo, cross-country ride that followed the historic Lincoln Highway. Cyclist Gregory Maassen, Ph.D., who is afflicted with peripheral neuropathy (PN), a neurological condition that attacks his nerves and causes areas of his body to burn and go numb, ended his four-month, cross-country journey in San Francisco.

Gregory, who credits e-biking and physical activity with helping him manage his symptoms, rode over a new course on the Lincoln Highway, considered the first road across America, and which was once traveled by President Dwight D. Eisenhower when he was Lt. Colonel in the Army in 1919.

More on The Californer
His journey began from his home in Washington, DC, to California as a fundraiser of one cent per mile to support the Foundation for Peripheral Neuropathy (FPN), a nonprofit that provides research and awareness for the more than 100 different kinds of PN. He has already raised nearly $150,000 during his ride. Peripheral neuropathy affects approximately 30 million Americans, including Tom Brokaw, George Lopez, Alan Jackson and many others.

According to Dr. Ahmet Hoke, Johns Hopkins Medicine, director of the Neuromuscular Division, professor of neurology, "E-biking is a wonderful low-impact form of exercising that can be a meaningful aspect of a patient's recovery and well-being."

"This fundraiser, using an e-bike to traverse the Lincoln Highway for the very first time, is a tribute to the special friendship between the Dutch and the Americans, and to President Eisenhower's vision to create the nation's Interstate Highway System," says Gregory. "It celebrates the longest uninterrupted peaceful relationship that the United States has with any foreign country and supports the millions of people everywhere suffering with peripheral neuropathy. Medical research for PN is significantly underfunded, and finding a cure for this debilitating condition must be addressed."

More on The Californer
"Gregory is a true inspiration to patients who suffer from peripheral neuropathy," says Lindsay Colbert, executive director of the Foundation for Peripheral Neuropathy. "His unprecedented e-bike tour shows the true power of hope and determination to the people who are struggling to manage this disease alongside him."

Gregory began his e-bike journey as a Dutch national, took his American citizen exam on April 29, was sworn in on May 21, and completed his ride in San Francisco as a U.S. citizen.

To view Gregory's journey and to support his fundraiser for FPN, visit www.ebiketour.org.

SOURCE Foundation for Peripheral Neuropathy
Filed Under: Business
0 Comments
Latest on The Californer