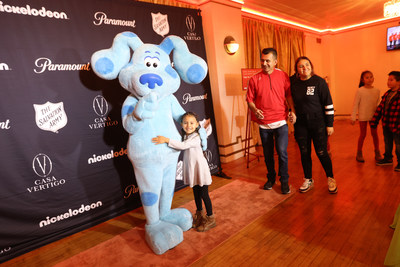 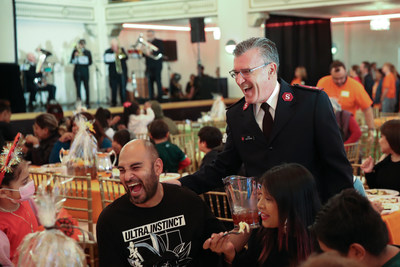 LOS ANGELES, Nov. 23, 2022 /PRNewswire/ -- The Salvation Army, Nickelodeon, Paramount and Casa Vertigo hosted the Annual Feast of Sharing Thanksgiving meal event on Tuesday, November 22nd at Casa Vertigo in Los Angeles. It was the first in-person event in two years after the beloved annual event transitioned to a drive through Thanksgiving meal distribution during the pandemic.

In the spirit of the holidays, Nickelodeon and Paramount sponsored The Salvation Army event to provide a warm catered traditional Thanksgiving meal and entertainment to hundreds of families in the Pico Union District. Approximately 1,200 people attended one of two seatings (4pm and 7pm) in the historic venue. Casa Vertigo generously donated the space for the evening.

"For nearly a decade, the impact that this partnership with Nickelodeon has had on the downtown area of Los Angeles during Thanksgiving is extraordinarily meaningful," said Col. John Chamness, Divisional Commander of The Salvation Army's California South Division. "In that span of time, more than 15,000 people have been served a delicious holiday meal and have been treated to an experience they'll never forget, and we are so grateful."

More on The Californer
Nickelodeon rolled out its iconic orange carpet so families can take pictures with popular life-size Nickelodeon characters like Blue from Blue's Clues and Spongebob Squarepants himself!

"This long-standing event is so special to our Nickelodeon staff and talent family, and we were thrilled to be back in person this year serving the community," said David Bruson, Nickelodeon's Director of Public Affairs.

There were also Nickelodeon themed activities for families who attended as well as entertainment provided by the kids' mariachi band from The Salvation Army's Red Shield program in Downtown Los Angeles.

About The Salvation Army

The Salvation Army annually helps more than 30 million Americans overcome poverty, addiction, and economic hardships through a range of social services. By providing food for the hungry, emergency relief for disaster survivors, rehabilitation for those suffering from drug and alcohol abuse, and clothing and shelter for people in need, The Salvation Army is doing the most good at 7,000 centers of operation around the country. In 2021, The Salvation Army was ranked No. 2 on the list of "America's Favorite Charities" by The Chronicle of Philanthropy. For more information, visit SalvationArmyUSA.org. Follow us on Twitter @SalvationArmyUS and #DoingTheMostGood.