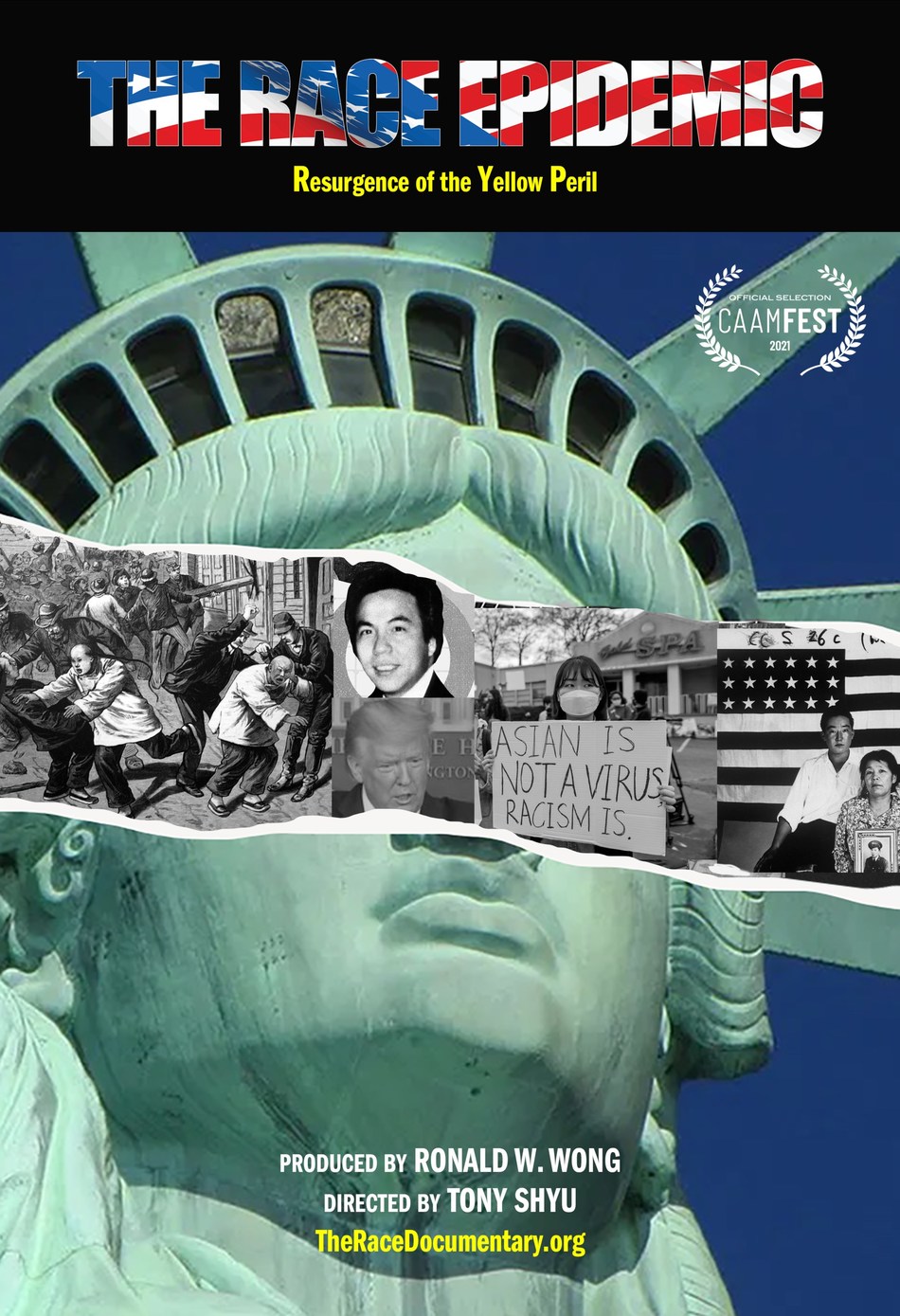 LOS ANGELES, May 14, 2021 /PRNewswire/ -- The Race Epidemic documentary premieres on May 13, 2021 at Center for Asian American Media Film Festival (CAAMFest), the nation's largest Asian American film festival. The Race Epidemic documentary is a significant film of our time as innocent Asian American and Pacific Islanders (AAPIs) are being attacked and murdered on our streets. The documentary tells the story of AAPIs and their unique history in the broader context of racism in America. Racism is America's epidemic – it has plagued our nation since its inception. It attacks different groups more intensely at different times, but it always persists.

Ultimately, the film seeks to heal America through understanding, compassion, and knowledge. "A deep understanding of each other's history and struggles is fundamental to us coming together as a nation. Unfortunately, in times of economic uncertainty and fear race has been used to divide us. This film can help people understand we are all in this together, and when one of us is attacked we all suffer," said Ronald Wong, writer and producer of the documentary.

The documentary's release comes amid widespread reports of discrimination and violence against AAPIs during the coronavirus outbreak, 32% of Asian adults say they have feared someone might threaten or physically attack them – a greater share than other racial or ethnic groups. The vast majority of Asian adults (81%) also say violence against them is increasing, far surpassing the share of all U.S. adults (56%) who say the same, according to a new Pew Research Center survey released just this week.

The time is right for this film and its important message. In selecting The Race Documentary for inclusion in CAAMFest the selection committee said: "It's an incredibly relevant film due to the rise of anti-Asian hate crimes. It was nice to see you connect the historical legacy of hate with what's happening now. We think your film would be perfect for our festival."

While recent attacks on AAPIs have tragically risen, this is not a new story, as it has played out throughout America's history. The Chinese Exclusion Act was preceded by riots in both San Francisco and Los Angeles Chinatowns where Chinese laborers were murdered and millions of dollars in property were destroyed because of the perceived threats and public health dangers the Chinese community posed.

More on The Californer
However, this film is much more than just documenting history; it is also meant to stir emotions and actions. "I learned about the perceptions of Asian Americans through film. When I was growing up in Southern California, I was routinely ridiculed and bullied based on negative perceptions of AAPIs on the big screen. Negative stereotypes and demeaning portrayals of us has real effects on our community and the psyche of AAPIs," said Tony Shyu, director and writer of The Race Epidemic.

The documentary is being produced under the auspices of the Asian Pacific American Leadership Foundation (APALF), a nonprofit 501(c)(3) organization. APALF's mission is to engage the AAPI community in active civic participation by creating, supporting, building and strengthening the local community infrastructure to help prepare and train qualified AAPI leaders for public service. The documentary will be used as part of an overall curriculum to help respond to bias, discrimination, and violence against AAPIs.

The Race Epidemic Documentary will be viewable at CAAMFest from May 13 to May 23. For more information visit https://caamfest.com/2021/movies/the-race-epidemic/

Ron has been involved in politics and political campaigns for the past 30 years.  He has won nearly 100 awards for his creative work including the production of commercials, public service announcements (PSAs), and traditional and digital advertising, including recognition from the California State Legislature Asian Pacific Islander Caucus, among many others.

A master storyteller, Ron is a recognized expert in politics, communications, and advertising targeting diverse communities. He served as a political appointee in President Clinton's Administration at the U.S Department of Justice Community Relations Service, where he worked on hate crime policies, racial reconciliation, the President's Initiative on Race, and developed the "One America Dialogue Guide."

The Race Epidemic is the culmination of Ron's work in politics, social justice, and the political empowerment of diverse underrepresented communities for the last 35 years. Ron has been involved and committed to the civic and political engagement and empowerment of AAPIs for nearly four decades.

Tony Shyu, Director & Writer - is a noted director and award-winning screenwriter. Tony serves as director & producer of The Race Epidemic. Tony spent many years in Asia creating award-winning commercials for major brands such as Avon, Volvo, and Visa.  He won the Taiwan Times award, which is Asia's equivalent of a Clio award. The PSA he directed for API Vote starring George Takei, John Cho, and Constance Wu won the 2016 Videographer award.

More on The Californer
Tony is also currently in production on an all-Asian American cast show for Bravo TV and in development for an all-Asian cast TV show for Netflix. His award-winning screenplay Macau Omen, has been translated into a novel and now is being developed into a feature film. His short film, Macau Twilight (2008) was an official selection at the BFI London Film Festival. Tony also wrote, directed, and produced a feature film, Tequila Body Shots (1999), which was distributed by Lionsgate.

Tony received his B.A. and M.F.A. in film from the renowned Art Center College of Design in Pasadena, which is known for creating visual story tellers. His classmates at Art Center included famed award-winning directors Michael Bay, Zack Snyder, and Tarsem Singh among many others.

Johnnie Giles is an Executive Producer and previously served as Executive Director of External Affairs for Comcast Corporation and Vice President of External Affairs for Comcast Cable, in this role he was the principal interface between Comcast and the national AAPI community organizations and working with the Congressional Asian Pacific American Caucus. He has been active within the AAPI community for nearly three decades. He previously served on the executive board of the Center for Asian American Media, and was a founding member of Asian Americans for Good Government PAC, which supports AAPI candidates for elected office. Johnnie also was the founding board chairman for the California Asian Pacific American Chamber of Commerce, and he has also served on the boards of a number of organizations serving the AAPI community including AAJC, APIAVote, APALC, APAPA, JACL, ACE, OCA, and APAICS C4.

John & Sarah Kobara serve as Executive Producers. John is a social entrepreneur who has been advancing social change and the issues of the AAPI communities through a variety of positions of influence. He has been leading workshops for Asian American leaders for 30 years. John and Sarah have raised three young Asian-American leaders who are all pursuing for-purpose careers. John and Sarah have devoted their lives to sustaining the dream of their immigrant ancestors by helping others build a more joyful, equitable, just, and compassionate world.  They actively support the Japanese American National Museum, Center for Asian Americans for Self Empowerment (CAUSE), the US Japan Council, MLK Community Hospital Foundation, Coro and Defy Ventures.

ABOUT CAAM
For over 40 years, the Center for Asian American Media (CAAM) has been dedicated to presenting stories that convey the richness and diversity of Asian American experiences to the broadest audience possible. As a nonprofit organization, CAAM funds, produces, distributes, and exhibits works in film, television, and digital media. For more information about CAAM, please visit www.CAAMedia.org.