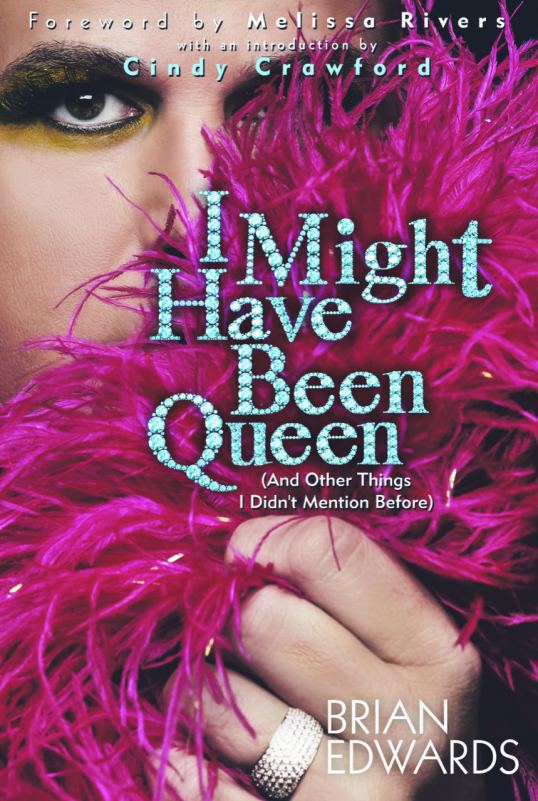 I Might Have Been Queen (And Other Things I Didn't Mention Before) Is The Follow-Up to His 2013 Best-Seller, Enter Miss Thang, Edwards' Insider Stories as a Pivotal Figure in Gay Culture are Simultaneously Hilarious and Inspirational
HOLLYWOOD, Calif. - Californer -- Over his four-decade career in the entertainment industry as a multi-award winning celebrity talent executive, producer, writer and occasional performer, Brian Edwards has worked with some of the biggest names in show business, not to mention some of the most beloved gay icons:  Donna Summer, Joan Rivers, Cindy Crawford, Susan Sarandon, Melissa Rivers, Whoopi Goldberg, Farrah Fawcett, Shirley Jones, Naomi Judd, and Vanessa Williams, just to name a few.  His debut book, published in late 2013 and titled, Enter Miss Thang, was an unabashedly honest and side-splitting memoir which became a national best seller and received several awards along the way, including top honors at The National Indie Excellence Awards, The International Book Awards and the IBPA Awards, ultimately becoming the most honored LGBT non-fiction book of 2014.  Never one to let the party end, Edwards has just published his follow-up, with even more insider tales, titled, I Might Have Been Queen (And Other Things I Didn't Mention Before).

"This new title surprised me, because we all know without a doubt that Brian is the queen – or at least the biggest queen I know!  So, get ready, because this time around, he's a little bolder, more daring, sassy and Diva-ish (if you can imagine that). And rest assured, a good time will be had by all who read this entertaining, heartfelt and incredibly funny next installment about the life of someone I truly adore."

"We all have them – special people in our lives whom we may not get to see on a regular basis, but we know they are ALWAYS in our corner.  And as far back as I can recall, my dear Brian Edwards has been there for me and for my family. Over the years, he has remained a loving, constant and positive presence in my life. He is truly part of my family. Through ups and downs, Brian has never wavered in his support."

In his latest book, I Might Have Been Queen (And Other Things I Didn't Mention Before), Brian Edwards returns with more colorful stories filled with humor, chaos and inspiration.  "The phrase, 'I Might Have Been Queen' represents the times in my life that I've won, the times I felt I should have won, and girl, the numerous times that I didn't!" says Edwards.  "I'm poking fun at my own personal journey. Life is too short to take so damn seriously all the time.  With everything going on in the world today, sometimes you just need to give people a reason to laugh.  And I hope I've accomplished that within the pages of this book.  Lord, my load is heavy!"

Escaping from the sleepy little town of Covington, Louisiana in 1985, Brian Edwards always felt destined for something extraordinary and headed directly for the bright lights of Hollywood.  After a couple of years paying his dues, he landed a job as an executive assistant to legendary five-time Grammy Award winner and undisputed Queen of Disco, Donna Summer (Brian is portrayed in the in the smash hit, Tony Award nominated Broadway show Summer: The Donna Summer Musical, which embarks on its' first U.S. national tour in the fall of 2019.)  In 1995, he moved on as assistant to talent agent Betty Fanning, then Vice-President of Commercials at the William Morris Agency in Beverly Hills.

More on The Californer
After three years at William Morris, Edwards moved into the world of television, working as Manager of Celebrity Talent for American Movie Classics (AMC) and WE: Women's Entertainment Networks, and as Talent Executive / Talent Producer for three Emmy Award winning shows (2001's "Reel Models: The First Women of Film", Hosted by: Barbra Streisand - featuring Susan Sarandon, Hilary Swank and Minnie Driver; 2002's "Beyond Tara: The Extraordinary Life of Hattie McDaniel", Hosted by Whoopi Goldberg; 2004's "When I Was a Girl" series narrated by Charlize Theron and Kristin Davis.)  Other work includes Talent Executive / Talent Producer for over 30 CMT: Country Music Television specials.

In September of 2015, Edwards served as a judge for the 95th Annual Miss America Pageant – a lifelong dream come true.  And during that same week, he also orchestrated Vanessa Williams' triumphant return to the pageant 32 years after she made history as the first black woman to be crowned Miss America.

He was honored by The International Press Academy in 2012 with the Satellite Award for "Outstanding Contribution to The Field of Entertainment" becoming only the third recipient of this honor in the academy's history.  He produced two highly acclaimed exhibits on iconic legends Joan Rivers and Donna Summer at the Grammy Museum in Los Angeles - "Donna Summer: Four Seasons of Love" (June 2014 - April 2015) and "Joan Rivers: Can We Talk?"(June 2015 - September 2015).