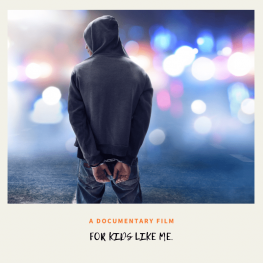 Upcoming Documentary Film Dedicated to Children With Incarcerated Parents is in Preproduction and Seeking to Collaborate With Netflix Producers
LOS ANGELES - Californer -- Actor and Filmmaker, LaDàna, recently shared the inspiration that led to 'For Kids Like Me' – a documentary film project presented by a 501(c)(3) nonprofit organization she founded: MyFairyGodParents.org. The film is in preproduction and inspired by her teen daughter, Anyé Young; author of  Teen Guide to Living With Incarcerated Parents -- a book that signaled that the full story of children with incarcerated parents needs to be told. For Kids Like me (#FKLMdoc) is LaDàna's directorial debut. In an interview with Disrupt Magazine, she shared in her own words what makes this documentary a needed film.

It's time. Actually, it's past time. I'm directing this film to share my daughter's journey as an advocate for racial justice but this is a project that has been on my mind and in my heart since I found out her father was incarcerated and he wouldn't have his freedom again until she was pretty much graduating from university. #FKLMdoc tells the story of the teens and young adults impacted by an unjust criminal justice system. And it tells the story through the eyes of kids who, in a real sense, are prisoners on the outside. Anyone who feels like there isn't a problem in the U.S. with legalized slavery — aka the prison system — should watch this film. Anyone who is a caregiver of a teen who is shutting down and simply refuses to talk about the mental anguish that comes with having a parent ripped away for a sentence that doesn't match their crime should watch this film. Any child who, whether it be a small child or a child who is now an adult with a parent still in prison should watch this film. There are several perspectives and all of them are equally important and that's what makes this film like looking in the mirror and realizing change has to come for these kids and it has to keep its momentum. No more sweeping things under the rug. There are millions of children with incarcerated parents and they need to be considered too.

More on The Californer
Read the full interview on Disrupt Magazine at https://disruptmagazine.com/ladana-her-upcoming-film-her-dedication-to-justice-impacted-youth/.

#FKLMdoc teen producer, Anyé Young, shares her motivation for joining this documentary film project in the video below: