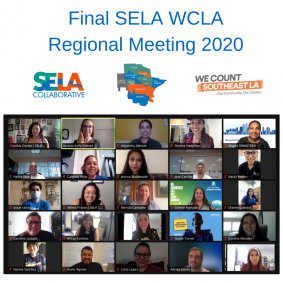 Local Southeast LA organizations mobilize the region's stakeholders to educate, assist, and elevate the 2020 Census despite pandemic, lockdown and wildfires
LOS ANGELES - Californer -- The Southeast Los Angeles (SELA) Collaborative thanked its Census partners and applauded their efforts, resiliency and determination to overcome hurdles and get residents counted for the 2020 Census.  While the Supreme Court's decision to uphold the Administration's decision to end the Census early represents another example of the many challenges facing the 2020 Census, it is undeniable that the work of SELA Census partners was critical in ensuring SELA did not experience a catastrophic regional undercount. More time would have undeniably supported the complete and accurate count of the region.

Since 2018 the SELA Collaborative began to engage community on the 2020 Census and in 2019 became the regional coordinator and co-convener for the We Count LA Campaign, formerly known as  Los Angeles Regional Census Table. As regional co-convener and coordinator, the SELA Collaborative oversaw the organization and communication efforts among Southeast LA community-based organizations, municipal staff, elected offices, small businesses, and grassroot groups to develop a comprehensive strategy to ensure the residents in the hard-to-count (HTC) region complete their Census forms.

A major hurdle to that comprehensive outreach strategy was the coronavirus (COVID-19) pandemic that shut down the country on March 13th, one day after the start of the Census self-response phase. Outreach partners had to cancel their in-person events and pivot efforts to engage community remotely while balancing Census messaging and developing creative strategies to engage residents and uphold social distancing guidelines.

"Counting residents in the 2020 Census was definitely a challenge," said Yesenia Mendoza, Development Coordinator with Latino Equality Alliance. "We had a world-wide pandemic, a Black Lives Matter movement, a lock down, and wildfires. This experience fueled our energy because we understood how vital the Census is to ensure our community has the resources, they deserve for the following 10 years."

More on The Californer
Cynthia Cortez the Associate Director of SELA Collaborative agreed. "Reaching Southeast LA community members and convincing them to participate in Census 2020 was not easy. In addition to this unexpected change in outreach activities, SELA outreach partners also had to respond to shifting US Census Bureau timelines and residents' sentiments around government distrust."

Oscar Cisco the Census Field Organizer from Council of Mexican Federations in North America (COFEM) explained, "COFEM empowered immigrant communities by making sure they were recognized as part of the population to be full participants in the United States. [COFEM] went door-to-door, called, texted, hosted food banks, and used media like TV and radio to ensure that our community felt safe and proud completing the Census."

SELA Census outreach partner AltaMed Health Services educated other Census partners on the importance of integrating 2020 Census messaging in a minimum of 5-touchpoints giving the example of its patient engagement strategy. "AltaMed Health Services is proud to have made over 3.1 million calls/texts to the hardest to reach community members and provided Computer Kiosks staffed by promotoras at our clinic waiting rooms to help individuals fill out the Census," said Jennie Carreón, Assistant Vice President of AltaMed Health Services. "This collective effort resulted in supporting 36,784 individuals in completing their Census form and protecting over $735,680,000 in federal funding for vital community services.".

More on The Californer
Significant partnerships from elected offices such as the Office of Assembly member Anthony Rendon, Senator Lena Gonzalez, and Supervisor Hilda L. Solis as well as the National Association of Latino Elected and Appointed Officials (NALEO) brought together elected and community leaders to discuss and strategize around Census 2020.

Locally, the SELA cities united to host the SELA Cities Caravan on June 16th, 2020 as part of a countywide effort with the We Count LA campaign led by California Community Foundation (CCF).

"CCF is so proud of the SELA Collaborative's tireless work to get out the census count," said Stephania Ramirez, the Director of Strategic Initiatives at California Community Foundation. "SELA Collaborative was a leader from the very beginning of our planning, a leader during the endless pivoting due to COVID, and a leader to the end. The people of the vibrant Southeast communities should be proud of SELA Collaborative's dedication."

The commitment from Census outreach stakeholders in the SELA region achieved major milestones in regional capacity and civic engagement. New connections and collaborations were fostered. Nonprofit organizations deepened their data management and bilingual communications capacity with support of the We Count LA Campaign and the Census outreach funding California Community Foundation provided to CBOs.

Southeast Los Angeles Collaborative was founded in 2011 as a network of organizations working together to strengthen the capacity of the nonprofit sector and increase civic engagement in Southeast LA. Through its 12 member partners SELA Collaborative works to strengthen the SELA community, build collective power, and encourage innovation to drive regional systemic change. For more information please visit www.SELACollab.org

Filed Under: Non-profit
0 Comments
Latest on The Californer