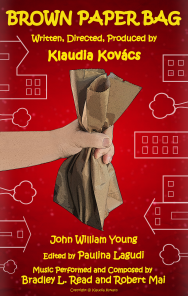 BROWN PAPER BAG directed by multi-award-winning fimmaker, Klaudia Kovács, to have Los Angeles premiere at the Valley Film Festival's Dark Comedy Program at Laemmle NOHO 7 on Friday, August 5, 2022 at 5 pm.
HOLLYWOOD, Calif. - Californer -- Writer, director, and producer Klaudia Kovacs' BROWN PAPER BAG, a 3-minute film with an unexpected twist, is about an endearing elderly man in California who finds that cream rises to the top.

The short premiered in France this May and the filmmaker won the "Best Directing" award at the Cannes International Cell Phone Cinema Showcawse organized in conjunction with the Marche du Film - the business counterpart of the Cannes Film Festival - one of the largest film markets in the world. The President of the Jury was Lawrence David Foldes who is an Executive Committee Member of the Academy of Motion Picture Arts and Sciences.

More on The Californer
BROWN PAPER BAG also received the "Jury's Special Mention" in Cannes at the Artisan Festival International World Peace Initiative (Special Consultative Status with ECOSOC to the United Nations). The organization was founded by Her Royal Majesty - Queen Angelique Monet Gureje-Thompson in 2012 and this year celebrated its 10 year anniversary.

Klaudia Kovács wanted to continue working in the midst of Covid restrictions while Hollywood came to a standstill. The filmmaker literally took matters into her own hands and shot her "pandemic project" with her iPhone. BROWN PAPER BAG was brought to life with a minimum budget, cast, and crew.

Kovács is not the only one in Hollywood who has shot a film on a cell phone. Steven Soderberg, Sean Baker, Malik Bendjelloul, Park Chan-kyong, and Park Cahn-wook have done so as well.

Kovács is known for her multi-award-winning, feature-length Cold War documentary, TORN FROM THE FLAG, which she shot with two of "the greatest cinematographers of all time" Academy Award winner, Vilmos Zsigmond, and ASC Lifetime Achievement Award winner, Laszlo Kovacs.

More on The Californer
BROWN PAPER BAG was part of the Palm Springs International Film Festival's Market in June.

After its American premiere at the 22-year old Valley Film Festival, BROWN PAPER BAG will be available for distribution.

Tickets to the screening can be purchased at: https://www.valleyfilmfest.org/vff22shortfilms/brownpaperbag